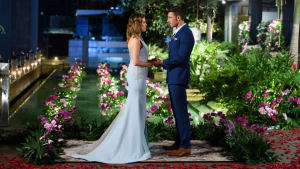 Australia has spoken and it loves heartbreak, with the finale episode of The Bachelorette winning the ratings rose, but sending Twitter in a downward spiral.

More than 970,000 metro viewers tuned into see Georgia Love choose Lee to be her main man – and the internet can’t quite handle being “Nikki’d” again.

The Bachelorette saved its biggest ratings for the finale episode, but didn’t manage to match Sam Frost’s finale episode that drew in 1.52 million fans. The first half of the show attracted a noteably low audience of 790,000 viewers.

#BacheloretteAU trended across Australia, with author Zoe Foster Blake, comedian Joel Creasey and host Osher Gunsberg tweeting up a storm throughout the program. Brands were also tweeting about the show, including Sportsbet and sponsor Oral B.

Rumours circulated earlier this week that the show would not return next year, however yesterday AdNews, via industry sources, confirmed that was not the case.

Ten has now today announced it will be back for a third season and casting for season three will commence in early 2017. Although some have claimed they will never watch the show again:

WHAT?!?!?!?! Matty got out first??
CHANNEL TEN YOU'VE FUCKED ME UP AGAIN#BACHELORETTEAU

Maaaan this is BRUTAL I can't watch this guy's heart break in a 1,000 pieces 😭😭😭 #bacheloretteAU