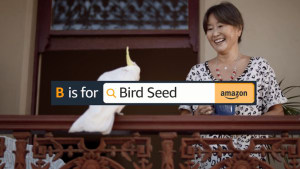 TBWA Sydney has revealed its first work for Amazon since winning the account earlier this year.

The new ad, which is currently being played throughout Nine's Love Island, positions Amazon as the marketplace for everything from A to Z.

In one of the ads, a young boy ruins his mum's lipstick by drawing all over his face. She is seen then adding lipstick and facewipes to her list of purchases on Amazon.com.au.

In another spot, a woman befriends a cockatoo and adds bird seed to her Amazon shopping list.

The series of ads are the first major TV push from Amazon since it launched in Australia last December.

Previously the retail giant was running global ads in this market and worked with Ogilvy Sydney to create an outdoor campaign for its Echo product.