SXSW: Adblockageddon is here; did the industry do enough to stop it? 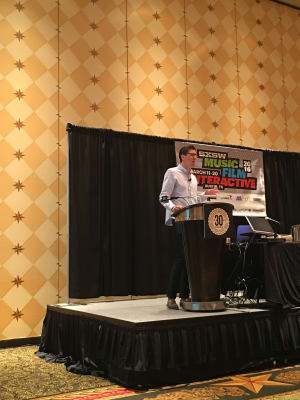 Adblocking is predicted to cause a $41.4 billion economic problem in 2016, but was the industry quick enough to react to this Michael Bay movie-esque issue? Vizeum UK's innovation director James Schad doesn’t think so.

Schad was speaking on day three of South by Southwest (SXSW) Interactive and he says that when he started researching his talk titled 'It's Adblockageddon! How to Survive and Prosper' he was surprised at the level of preparedness from the advertising industry to the threat of adblocking.

“I'm going to be brutally honest here, I feel that my agency is underprepared in knowing about how adblocking and viewability is affecting its ad buys,” he says. “When I first started preparing this talk nine months ago, it opened my eyes to the fact that the media industry wasn’t as clued up as it should have been to a pretty big threat."

He explains that programmatic could also be the cause of some of these issues, saying there’s an issue of oversupply of impressions in the market, and if half of 18-24 year-olds are using adblockers, it already eliminates half of the audience that a brand may be looking to target.

“Programmatic is seen as a brilliant opportunity for advertising to target people in a cost efficient way, but it’s part of the problem to an extent.”

Schad admits that he himself blocks ads saying he started blocking eight weeks ago and since then he’s felt “liberated” because he is no longer being followed or tracked. He addressed however the fact that publishers are the ones who are most hurt by the rise of adblocking, noting that small publishers who rely on a youth audience are most likely to feel the heat.

In 2016, 200 million desktop users are expected to use adblocking software, with the highest user group being 18-24 year-olds (47%), with the the top reasons consumers install adblocking software being the interruptive and annoying nature of ads, slow web speeds, and the fact they’re often irrelevant.

While there is no silver bullet to stop adblocking, Schad revealed three point plans, and in one case a four point plan, for agencies, publishers and consumers, who are hoping to survive in this new adblocking world.

For publishers, Schad suggests education is key for the value proposition of seeing ads in order to get content for free, followed by giving consumers control and diversifying distribution models.

For agencies and advertisers he suggests that native ad units could be a saviour, as well as asking permission in regard to tracking or going back to traditional media channels, and if that doesn't work maybe acquire an adblocking company.

For consumers he believes a spoiler blocker is key so the likes of Game of Thrones is never ruined, become more conscientious when it comes to adblocking, and if all that doesn’t work, consumers can look to profit off their data, by selling it themselves.