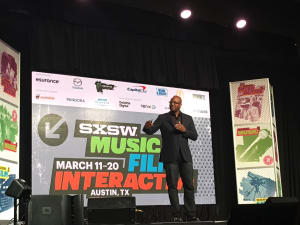 BuzzFeed has today announced it’s combining the power of all its platforms and offering that scale up to brands, with its ad offering BuzzFeed Swarm.

The news came on day two of South by Southwest (SXSW) in Austin, with the media company’s top marketer, Frank Cooper, explaining that after an alpha test, Swarm is moving into beta and will be available for all its advertisers.

Cooper says BuzzFeed “lit up” its network for the film, with a commenter who saw the content saying it was the “best marketing move NBC could make”.

“[We thought] What if we open up an opportunity where all the levers are pulled, and where our advertisers can participate,” Cooper says.

“Coming out of that strategy, was a product called Swarm. Swarm is our 360 cross-platform strategy that was designed to light-up our entire network in a big coordinated way, for a condensed period of time,” he added.

Swarm is not designed to be an everyday ad product, with Cooper adding that utilising the Buzzfeed network in this way will be done in short bursts, for things such as the launch of movies, TV shows and products.

Cooper was at SXSW to talk about the future of media companies, and in his view the future lies in empathy.

He told the room that empathy and human connection are the new “superpower” for building large audiences, citing that BuzzFeed creates content that speaks to the individual and helps them lead their lives, rather than dictating how they should do it.