Adblocking in the UK jumps up to 22%

The Internet Advertising Bureau (IAB) in the UK has found that more than a fifth of internet users in Britain now use online adblockers.

However it's not all bad, with the study conducted in conjunction YouGov, finding that more than half of the users using adblocking software would turn it off to gain access to content.

In October, the number of people using adblockers sat at 18%, now it's at 22%, with nearly two-thirds, or 64%, of respondents who’ve downloaded the software have received a notice from a website asking them to turn off their adblocker.

With 54% saying that in certain situations, they would switch off their adblocker if a website said it was the only way to access content – this rises to nearly three-quarters, 73%, in the 18-24 demographic.

The IAB UK’s CEO, Guy Phillipson, says that an ad funded internet is “essential” for providing revenue to publishers so they can continue to make their content available at little, or no cost.

“We believe ad blocking undermines this approach and could mean consumers have to pay for content they currently get for free.” 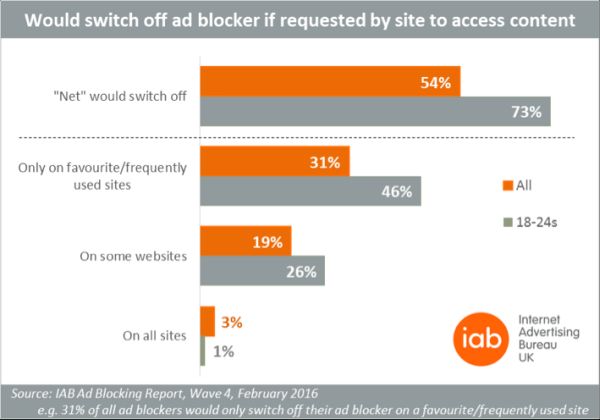 He believes that part of the solution to tackle adblocking lies in making consumers more aware of the consequences of using the software.

“If they realise it means they can’t access content or that to do so requires paying for it, then they might stop using ad blockers. It requires reinforcing this “trade-off” message – ads help to fund the content they enjoy for free,” he added.

It's the same old story for why people block ads, with 45% of respondents saying that if ads didn't interfere with what they were doing they wouldn't block them.

Speaking last year at the IAB’s inaugural leadership summit in Sydney, IAB’s US CEO and president, Randall Rothenberg says that as an industry we need to take responsibility for the rising problem that is adblocking.

He also explained that in an attempt to get more analytics on web traffic, some brands have also slowed down their sites which has pushed more people to download and use ad blocking software.

“Anybody who installed adblock plus knows it speeds up your internet,” he said. “There needs to be more information about how to create better user experience,” he added.