Sportsbet spot predicts how NRL season will play out 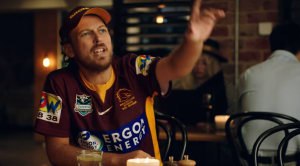 The Broncos player says to the waitress: "I ordered a premiership a while ago and it still hasn't come yet?"

Sportsbet has kicked off the NRL season with a brilliant ad that reflects on the winners (and losers) of last year's league.

Set in the 'NRL Restaurant', the ad shows various teams ordering from a menu of options, from an origin fullback to a full-bodied wine, named Jarryd Hayne.

Some are let into the restaurant, which resembles the top eight, and others are barred - like the St George Dragons.

One player representing the Titans asks the waitress if it would be possible to get a seat by the premiership table. The waitress scoffs and responds, "I don't think so".

In another scene, the waitress serves the Rabbitohs the "break a premiership drought and then do nothing for a few years" meal.

Read more: Gambling ads: The good, the bad and the banned

Addressing the Roosters, the waitress asks "How will you be paying for this sir?", alluding to the salary cap issues experienced by the team this year.

While Sportsbet usually works with BMF, the ad was created completely in-house.

The ad has already been viewed more than 400,000 times on Facebook with footy fans describing the ad as "f*cking funny" and "clever".

The spot follows on from Sportsbet's controversial Ben Johnson campaign, which was ultimately banned by the ad watchdog.