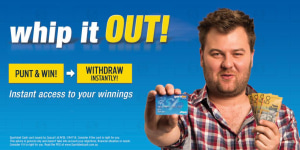 Sportsbet and its lead creative agency BMF have cut ties as the online gambling platform prepares to in-house the majority of its creative needs, AdNews can reveal.

BMF was appointed to the account back in 2015, and has since been responsible for some of the brand's most recognisable ads, including the infamous banned Ben Johnson 'juicing' ad.

Sources told AdNews Sportsbet will still look to work with external creative agencies in the future, with larger campaigns being pitched on a case-by-base basis.

“Sportsbet has built a strong internal content creation and production capability. With a track record of producing impactful work for social channels, our natural evolution has been to apply our learnings to the more traditional platforms," Sportsbet general manager marketing Tim Hernadi told AdNews.

"The scale of our creative challenges dictates whether or not we engage external agencies.”

The brand is also known for its controversial advertising strategy, last year topping the Ad Standards board for the most complained about ad of the year, while also breaking the record for most complaints.

The TV ad, which features a man naked from the waist up while ‘manscaping’, received nearly 800 complaints, superseding the previous record of 481 complaints.

BMF also confirmed the split to AdNews, adding that the new strategy didn't align with its business.

“Due to Sportsbet’s shift in creative approach and philosophy, BMF decided not to continue the partnership. We are very proud of the effective and award winning work we have created for Sportsbet, and wish them all the best," BMF MD Steve Mcardle says.

This move by Sportsbet continues the recent trend by major brands, which have increased the level of creative and media work done in-house.

Last year it was revealed that David Jones would take a large amount of its creative in house, while Carlton United Breweries developed a bespoke unit to service its digital advertising strategy.

Most recently, Woolworth created its own in-house team led by former Adshel boss Mike Tyquin, Cartology. The team would service all owned media sales for the supermaket chain.