Sportsbet tops the most complained about ads in 2018 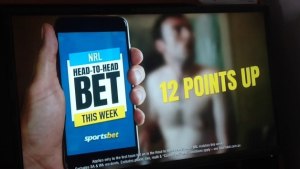 Sportsbet set the record for the most complained about ad in Ad Standards’ history.

The TV ad, which features a man naked from the waist up while ‘manscaping’, received nearly 800 complaints, superseding the previous record of 481 complaints for an ad by online dating site Ashley Madison in 2014.

Sportsbet wasn’t the only record-breaker in 2018. In second place with 715 complaints is iSelect with its ad that showed a women aggressively hitting a piñata in front of children.

Ad Standard said people were concerned about its depiction of anger and violence, particularly in front of minors, making it the second most complained about ad.

Both ads from Sportsbet and iSelect were banned by the ad watchdog earlier this year.

“It’s been the biggest year yet for Ad Standards, with two of the most complained about advertisements in 20 years,” Ad Standards CEO Fiona Jolly said.

“Statistics show the community understands the advertising codes protect community standards and that Ad Standards acts on their concerns.”

Overall, the independent body received a record number of more than 6,600 complaints this year, with a third relating to ads in the top 10 list.

Other brands that made the list include Berlei for its 'bouncing boobs' ad. The spot came in third with 135 complaints, followed by Ultra Tune, Universal Pictures and BCF.

All ads in the list are from free-to-air TV, which Ad Standards said highlights the importance for advertisers to ensure their content is appropriate for the relevant audience.

Key concerns this year continued to be around violence, nudity/sexuality/sex, and discrimination or vilification.

In addition to the Sportsbet and iSelect ads, another two cases were upheld by the body.

They included trailers for the films Halloween and Venom, which were both banned over concerns of violence.