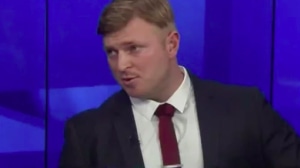 Nappy brand Huggies and optical retailer Specsavers are the latest brands to sever ties with Sky News over its decision to interview far-right activist Blair Cottrell.

The brands had sponsored Sky News and join American Express in the decision to distance themselves from the channel after Cottrell was interviewed on the The Adam Giles Show.

Cottrell, who once suggested all school classrooms should have a portrait of Adolf Hitler, is the former founder of the far-right group United Patriots Front.

Sleeping Giants claimed that a number of advertisers have also pulled spots from Sky News.

A small increase since last night but we are still holding strong, lets keep up the pressure - we will announce a fabulous new call to action in the morning. 😁#Auspol #AdShame #NotMyAustralia pic.twitter.com/oDl4e1ibm8

Other brands are being pressured into deserting Sky News, including Virgin Australia, which came under fire from users on Twitter over broadcasting Sky News in its airport lounges.

AdNews understands that Qantas, which has a long-standing partnership with Sky News, has no intentions to end it support of the broadcaster.

Sky News editor Greg Byrnes, who allowed former Northern Territory chief minister Adam Giles to interview Cottrell, has since admitted he made the wrong call and the channel has removed the interview from repeat programs and digital assets.

Former Labor minister Craig Emerson quit as a commentator for Sky News after it broadcast the interview, explaining that, “my father fought Nazis in WWII and was interred in a German POW camp”. He said the decision to put Cottrell on Sky News was “another step in a journey to normalising racism and bigotry in our country”.

Media commentators are disturbed that Sky News, which has signed an agreement to have the channel broadcast into rural areas on free to air TV, could provide a platform for hate speech to be broadcast in country areas.