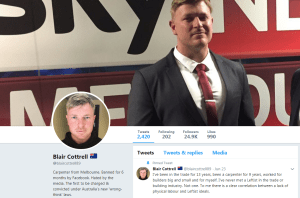 Facebook has refused to ban right-wing nationalist Blair Cottrell, despite a recent post regarding his interview on Sky News being reported for inappropriate rape comments.

The former United Patriots Front leader was banned on Twitter for making similar comments, yet his page still remains active on Facebook.

In both posts he stated that it was as if he had "raped the entire Sky News staff", referring to reaction on his appearance on The Adam Giles Show - which enraged the public and has seen advertisers pull support from Sky.

His post on Twitter singled out political reporter Laura Jayes who, earlier this week labelled Cottrell an "arsehole" not and activist. Her comments were also backed by Sky News political editor David Speers.

"So let’s recap, Sky News invited me onto their show, then within a couple of hours the deleted the interview, sacked the presenter and cancelled his program, lost Craig Emerson, who quit over it and banned me from ever coming on again," his post reads.

"Anyone would think I went on the air and spat in the face of the presenter then raped the entire staff on my way out. This is the most cowardly grovelling to the Left I think anyone has ever seen from any media company in the world."

Despite Facebook removing the actual interview from Cottrell's page, his other comments still remain.

Greens South Australian senator Sarah Hanson-Young, who was recently involved in a battle with Sky News over comments made about her during its The Outsiders program, also weighed in.

This is vile and well beyond offensive. It’s dangerous. Good on you @ljayes for calling it out. No one should have to put up with this type of abuse, and especially not in their workplace or for doing their job https://t.co/3OFEQi7O73

Sponsors and advertisers have been involved in a mass exodus this week, abandoning deals with Sky News in wake of the scandal, with American Express the latest brand to opt out of its deal.

American Express has made the decision to suspend advertising from Sky News, as recent content on the channel does not reflect our brand values.

AdNews understands that Qantas, which has a long-standing partnership with Sky News, has no plans to end it deal with the broadcaster.