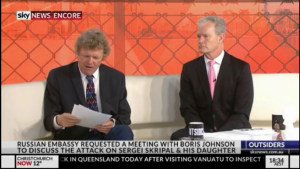 Activist group Sleeping Giants has turned its focus from Breitbart to Sky's Outsiders show and is encouraging advertisers to pull spend from the program.

He also highlighted the most recent program of Outsiders with Rowan Dean and Ross Cameron – where David Leyonhjelm had appeared – noting there were no ads at all, just free in-house promos for Foxtel and Sky. Earlier this month Greens party South Australia senator Sarah Hanson-Young revealed that she intended to pursue legal action following remarks made by Leyonhjelm.

The lack of ads saw host of The Bolt Report, Andrew Bolt, call out the advertising strike, labelling it a "vicious campaign" against Sky News.

But despite Bolt's seething counter-attack, Sleeping Giants is not backing down. In fact, it's upped the ante and is now calling for other advertisers, including Australia Post, Optus, Heinz, ANZ, Kia, Chemist Warehouse and more, to halt their advertising.

Sleeping Giants Oz is the Aussie spin off of a US campaign that works by using social media to pressure advertisers into withdrawing support for so-called hate speech.

Against the ultra-right-wing site Breitbart in particular, the US Sleeping Giants group has achieved success resulting in nearly 4,000 companies adding the site to their programmatic advertising blacklists.