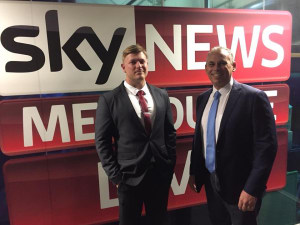 Advertisers have abandoned ship at Sky News following the airing of a controversial interview with right-wing nationalist Blair Cottrell, who appeared on the Adam Giles Show.

The former United Patriots Front leader was invited onto the Adam Giles Show to discuss his conservative views on clamping down on immigration.

Hi Benjamin, thanks for reaching out. I can see that you're in the process of contacting our corporate communications team and please be assured that the relevant departments will be contacted for internal review. Thank you.

Sponsors had already begun to ditch their sponsorship of the show prior to the interview, following a campaign led by activist group Sleeping Giants, which was directed at The Outsiders program.

Now, holiday and resort website Luxury Escapes has also announced it is pulling its sponsorship in the wake of the interview.

“Thanks for letting us know @WYS1WYG. So disappointing! We’re addressing this immediately and we will get our ads removed. Thanks again.”

Sky News was quick to 'apologise' to viewers, issuing a statement from news director Greg Byrnes.

It was wrong to have Blair Cottrell on Sky News Australia. His views do not reflect ours. The interview has been removed from repeat timeslots and online platforms.
- Greg Byrnes, News Director

The station's own commentators and journalists have also hit back, with political reporter Laura Jayes labelling Cottrell an "arsehole" and political editor David Speers quick to echo her point.

I have just arrived back in the country tonight to be met with the understandable outrage over this. 100% agree with @ljayes. As News Director Greg Byrnes says it was wrong to have this guy on Sky News. https://t.co/QQF4ESRmbJ

Former Labor minister Craig Emerson also announced he has quit as a commentator for the network.

"I have advised Sky News that I have quit as a Sky commentator. My father fought Nazis in WWII and was interred in a German POW camp," he said.

"The decision to allow Neo-Nazi Blair Cotterell onto the channel was another step in a journey to normalising racism and bigotry in our country."

Last year, Cottrell was found guilty of inciting serious contempt for Muslims after creating a fake beheading video and then uploading it to the United Patriots Front Facebook page.