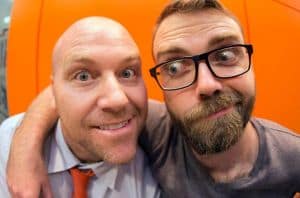 Soap – Linked by Isobar, the newest digital agency in the Dentsu Aegis holding group, has set its eyes firmly on creating products because the global network Dentsu is the perfect platform to take creating innovative products to the next level.

Soap – Linked by Isobar was born when Dentsu announced this month that it was acquiring independent digital agency Soap Creative and merging it with its other digital agency, Isobar, giving the agency that made its name in gamification a new name, but leaving the agency with the same feel.

One of the founders of Soap, Ashley Ringrose, told AdNews there is a lack of standalone businesses and products that have spawned from ad agencies, despite the fact that the industry is creative by nature.

Managing director of Isobar, Konrad Spilva told AdNews that the desire to create products is why there was such a great fit for Soap to join not only Isobar but also the Dentsu Aegis group.

“If an idea is attached to a brand, great. If it's not, productise it. That's kind of in our DNA, it's part of [Soap's]. That's why it made a lot of sense to come together,” Spilva said.

“We can harness all that, really. All that goodness that [Soap] had and now there’s a kind of global market for it too. There’s an Isobar global group where it may be this technology, it may be a prototype of something, where we will know we have a beacon solution or a drone solution, and that might be relevant for a client in any of our markets whether that will be in Asia Pacific or globally.

“Soap probably didn’t have that kind of access to be able to do that before,” he said.

The merger between the agencies has been in the works for the past eight to nine months. Ringrose and fellow co-founder Bradley Eldridge started to look into the possibility of joining a greater group a year ago.

“The first couple of months we were just like talking to one person and then we said: 'Oh, we should talk to more people and see what’s on offer.' Because, for us, it’s the important next step for the agency,” Ringrose said.

“We didn't want to just be a digital arm of an advertising agency.”

Eldridge told AdNews that while a few groups were having conversations with the pair about joining a greater holding group, they chose Dentsu because rather than having to pitch Soap to Dentsu, the conversion happened the other way around.

“There was lots of scope for growth with Dentsu, and I also think it having Konrad there as well from the start. He came to the first meet and greet and it was good having someone there we knew that we had a relationship with, we’ve worked together for a long time and we trusted him as well.”

Soap Creative longevity and Eldridge said that it felt like time to learn from other people in order to continue to grow the agency.

“I think it’s just time for growth. We’ve been around for 13 years, which is a long time and we’ve had a lot of success as well. But sometimes there are aspects of success that can hide failures as well or the things that we can do better.

“We’re both at a point in our careers where we’ve learned a lot from Soap and we’ve worked with some great people. But we wanted to see what else other people were doing, as well and learn from other people,” Eldridge said.

*Correction: In the article we previously said: “There’s My Plates from Mojo”. This has now been removed as it was incorrect. MyPlates is owned by Plate Marketing Pty Ltd, a division of Plate Impressions Pty Ltd. It has nothing to do with Mojo whatsoever.