Snapchat has revealed it has four million active daily users in Australia and 150 million users globally. This is the first time the company, recently rebranded to Snap Inc, has released local user figures to the public.

Every day, more than two-thirds of people using Snapchat create content, which demonstrates it is not a passive platform.

Globally, Snapchatters watch more than 10 billion videos each day, up 350% in the past year, and send more than one billion Snaps each day.

AdNews understands Snapchat executives measure and report its audience in daily active users rather than monthly because it believes monthly figures aren't an accurate measure of use.

A Snap Inc. spokesperson told AdNews that monthly figures “are no longer relevant”, even though rival platform Facebook reports daily and monthly.

Snapchat says it's committed to transparency of its user measurement figures, partnering with 15 third-party measurement companies, including Moat, Oracle, Nielsen, Millward Brown, Sizmek and more. It's keen to point out that advertisers receive independently verified metrics.

In Australia, Snapchat's closest rival in terms of target audience, Instagram, has five million daily Australian users, according to Social Media News, but Facebook claims it is closer to seven million.

However, Snapchat is quickly closing in on Instagram, growing at a faster rate, particularly among teen users.

Over the past few months, Instagram has been evolving its platform in ways that appear similar to Snapchat, introducing features such as ‘Stories’ and disappearing photos, which launched this week. In June, Instagram announced 300 million daily active users globally.

Snapchat is preparing to float on a US stock exchange in 2017 – a move that analysts predict will value the company at around $25 billion, making it one of the largest IPOs in recent times. Just three years ago Snap's founder Evan Spiegel turned down an offer from Facebook for $3 billion at a time when questions were raised about the platform's longevity.

Since then, Snapchat has grown into, arguably, the hottest social media network, with rapid penetration in the hard to reach under-25s demographic and a range of ad products that brands are starting to embrace.

Earlier this year, digital media experts told AdNews Snapchat is the one social platform that few brands had worked out, but offered huge potential. 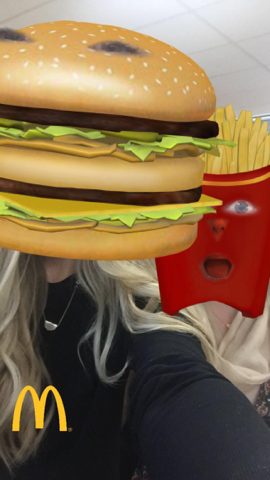 McDonald's was the first brand to launch a lens in Australia

Geofilters are available to both brands and consumers for as little as $20, whereas the sponsored lenses have a heftier price tag ranging from $50,000-$80,000.

The company has also focused on proving its ROI to advertisers, rolling out 16 measurement solutions, nine targeting capabilities and an API.

Oracle Data Cloud conducted a study across 12 ad campaigns and found Snap Ads drove a 2.1x sales lift and the average user played with a sponsored lens for 20 seconds.

AdNews revealed earlier this year that Kathryn Carter joined Snapchat as GM in May. Since opening a local office, Snapchat's team has grown to 15 people in Sydney across sales, operations and creative partnerships.

Snapchat has plans to grow its team further to meet increasing demands in this market. It's evidence that the social media platform, initially designed to share content which vanishes in a matter of seconds, is here for the long haul and brands are closely watching and increasingly experimenting in this space.