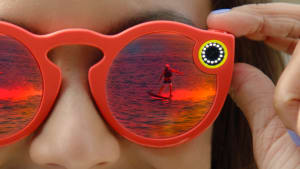 Snapchat is moving past the ephemeral and into the physical with its first hardware product set to take on the likes of Google Glass.

The announcement of Spectacles, first reported in The Wall Street Journal, also coincides with a rebrand of the photo-sharing company from Snapchat to Snap Inc. The new name of the company is part of its strategy to reposition Snapchat as a camera company rather than a social media company that can only live on mobile.

The sunglasses are integrated with a video camera that enables users to tap a button near the hinge and record up to 10 seconds of video froma first-person perspective. The footage is then automatically pushed to Snapchat memories.

Spectacles are sunglasses equipped with a video camera

With Spectacles, or Specs for short, Snap Inc is attempting to reimage how we take pictures, introducing a circular video format that can be viewed either vertical or horizontal on mobile to better mimic human sight.

As Snap CEO Evan Spiegel told WSJ, the rectangle format is a vestige of when we printed photos on paper, and isn't necessary anymore. He said that people having to hold their phones up all the time to shoot video is "like [having] a wall in front of your face.”

While the Snap product may look a lot like Google Glass at first take, Specs have been developed to avoid many of the pitfalls that led to Glass shutting up shop. Firstly, they sell for $130 in three colours – significantly cheaper than the $1500 price point of Google’s wearable experiment.

Secondly, Google Glass was largely ridiculed by mainstream consumers for looking geeky whereas Spectacles are more fashionable and available in three colours: coral, teal and black.

The range of Spectacles available

Google Glass faced backlash for the potential invasion into privacy it posed as you couldn’t tell if someone was recording you in public. But Spectacles light up when recording to make it more obvious to others.

Spiegel is downplaying Snap’s entry into the wearable market or push into the augmented reality space, referring to the device as a “toy”.

“We’re going to take a slow approach to rolling them out. It’s about us figuring out if it fits into people’s lives and seeing how they like it,” Spiegel told WSJ.

Watch the video to see how the glasses work: