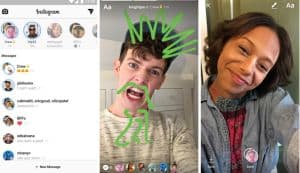 Photo-sharing social powerhouse Instagram has taken on rival Snapchat again, announcing it is delving into disappearing photos - the exact feature that made Snapchat famous.

The announcement came overnight, with the Facebook-owned platform outlining that users can now send disappearing photos and videos directly to groups and individual friends in a “spontaneous, pressure-free way”.

Disappearing photos and videos can only be sent via the services direct messaging function, with Instagram saying that since launching improvements to Instagram Direct last year, the number of people using Direct each month has grown from 80 million to 300 million people around the world.

With Instagram adding that this update is about creating a more visual way to connect users with their closest friends — all in one convenient place.

However, this move appears to be the latest in a string by the Snapchat's main competitor to copy the rival platforms main offerings.

Earlier this year Instagram announced it was launching a stories feature, which not only had the same functionality of its rivals – the ability to share photos to friends for a 24-hour period of time- it also had the same name.

Snapchat staffers were quick to call out Instagram for its previous copycat behaviour, with many referring to Snapchat as Michelle Obama and Instagram as Melania Trump.

In 2013, Facebook offered to buy Snapchat for US$3 billion but the offer was rejected by founder Evan Spiegel. Now, the company centred around the app loved by millennials is staring down the barrell of an USD$25 billion IPO, so it comes as no surprise that Facebook would be trying to replicate some of Snap Inc's success.

Instagram didn't just reveal it was delving into disappearing photos, it also announced that it was also launching live video functionality. Live has been a big play by Facebook, and now users of Instagram can share live videos for up to an hour via the platform. Users can also find new live stories via the explore functionality.