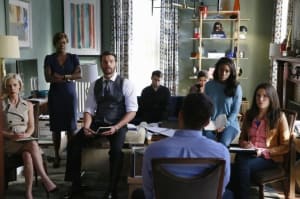 Seven West put its best integrated foot forward this morning at its 2015 upfronts presentation, changing the traditional “boring” format to showcase the multichannel offering it has across the business, rather than focusing on TV as it has in previous years.

The set up was “game changing” according to media agencies, and the network “has set the bar high” for its rivals, which will all present upfronts over the coming few weeks.

Seven West is making a play to be wherever eyeballs may land, and is pitching HbbTV as "the last piece of the puzzle".

At an interactive event in Sydney today, that had media buyers walk through a number of sets including a lounge room, the outback, a sports locker room complete with the smell of Dencorub, Seven West chief executive Tim Worner outlined his vision for the network for 2015, and the years ahead. He aims to maintain its number one spot until 2020, and it doing so by expanding and strengthening its play into different platforms including nascent hybrid-TV technology.

Matt Baxter, UM CEO said that Seven was really “hitting us over the head with the multichannel, platform diagnosis message at every opportunity. They want to make it very clear to the market that they get it, that audiences follow content not channels or platform,” he said.

“They bring their talent, their finesse and their attention to detail to the fore – that was very professional and they did everything they should and that you’d expect from a market leader. If they can manage that, it builds confidence in an agency. It's an advert for the network and everyone was on message.”

“It enabled me to get a sense of the different sides of Seven West and the depth that it has in sports, drama and lifestyle. And how seriously it takes all aspect of the business.

“What's important about the demonstration this morning is that it shows the progress and evolution that Seven has made and can talk to us on this level about it,” he added.

Integration is the key

Seven's chief revenue officer Kurt Burnette told AdNews that while TV would remain at the centre, Seven is now focused on creating solutions across a range of platforms.

"We've been pushing all the media channels for a while, but this is a real step-change for us. It's about a total audience capability, of about 16 million a month," Burnette said.

"What we've seen every time the group comes together to deliver a particular integration or solve a client problem...the outcomes are phenomenal."

Integrated efforts now account for around 30% of the network's revenue, he told AdNews after the event, where two or three years ago it would have been around 15%.

HbbTV on the Horizon:

Seven West is set to launch its first HbbTV offering during January's Australian Open tennis tournament, giving viewers the option to chose which matches they watch, “not just what Seven chooses”.

New channels including Seven Living based on its Better Homes and Gardens brand and a dedicated My Kitchen Rules HbbTV channel, will follow.

"We are constantly looking at the speed of change that's going on in our marketplace and asking ourselves what we have to do to keep pace with that change," Worner said.

"We are serious about integrating our sales teams like never before, we're serious about creating integrated business solutions. Teams that are all aligned with one thing in common – that their team's goals are their customers' goals."

It also put a big focus on the data which would be a available as a result of its HbbTV offering advertisers more targeting and retargeting opportunities.

Worner told agency partners that the network has three priorities for the year ahead, one of which being finding new revenue models. Under that banner and alongside HbbTV, Seven West is branching out into e-commerce using House Rules as a platform to allow viewers to buy products they see in the show, directly from e-commerce platform, giving viewers the ability to buy things from the show instantly.

Kate Rigg-Smith, Mindshare CEO told AdNews:"I think that hybrid play is something our clients are definitely talking to us about. They want to be able to be across all content and follow that content onto different platforms. I think Seven did a great job of demonstrating that play, I think that's what really impressed me about the upfront.”

Maxus CEO Jon Chadwick added: "HbbTV is definitely one of the more exciting things in the industry. The data you get from that, down to being able to target by postcode is really exciting."

Burnette, told AdNews that while HbbTV is nascent, it would the last piece of the integration puzzle for Seven, and that it was in for a long-term game.

"I would say the last piece in that puzzle is Hybrid TV and that will round out the ecosystem for us. This is a long-term game, we're not in it to hit the mark even by January next year. We have to have the content to give them to make sure they come. We need more TVs to adopt the hybrid but if you build it, they will come."

What's on the program?

Seven outlined a raft of new content, and returning shows for the next year, a line up that Baxter called “brave” for not relying on reality, but investing in strong “event drama TV”.

The network told media today that its offering to the centenary of the ANZAC landing at Gallipoli would the a special focusing on 10 Victoria Cross winners and their stories.

It will also hope to stoke some patriotic fervour with a new documentary series titled "Australia: The Story of Us".

Baxter said: “Seven could have dialled up the drama message. Tim Worner said it's a golden age renaissance of drama, and the network is taking a very balanced view – not throwing the baby out with the bathwater and getting rid of reality [programming] but investing in drama tentpoles rather than just rehashing reality formats.

“They've got a strong reality offer, enhanced sport with ESPN and a renewed focus on drama. They are adjusting and making course corrections, tweaking and making improvements [on recent years],” he said.

Seven will revive its 2004 format, My Restaurant Rules as Restaurant Revolution and while there has been talk that reality TV is on the wane, Brad Lyons said Seven is optimistic about existing formats and the the new.

Tajer added: “Seven has set the bar really high and done a good job at balancing freshening up content and introducing new content. Restaurant Rules – is a good example of bringing back an earlier reality format and freshening it up with the power of new technologies.”

In sport, Seven's tie up with ESPN is also seen as being “game changing” to strengthen its already strong sports line up, alongside the Olympics.

Head of programming Brad Lyons said casting Thomson was no accident. "We definitely are trying unashamedly to capture that Packed to the Rafters vibe," he said, adding that he hopped lightning would strike twice.

It has also expanded mini-series The Killing Field into a full series titled Winter, with Rebecca Gibney reprising her role.

International Imports:
As a result of Seven's partnerships with Disney, Sony, and NBC Universal, Seven will also bring Katherine Heigl's State of Affairs, How to Get Away with Murder (pictured), and David Duchovny's Acquarius.