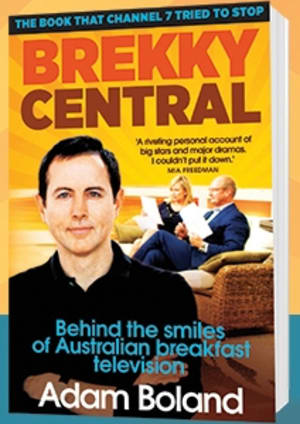 Adam Boland's memoir is now in stores, and despite the appearance of the publisher taking a devil-may-care attitude Seven is maintaining it gave the book the go-ahead anyway, taking legal action to try to delay the book's publication over fears of what Boland might reveal.

The network took legal action against Boland and MUP, seeking assurances that the book did not contain any salacious statements, however, yesterday MUP released the book, putting out the following statement from its director Louise Adler:

“We take our mandate seriously: to publish books that are in the public interest," she said.

“In the fine tradition of independent publishing in Australia, we don’t yield to pressure from commercial operators with deep pockets and a heightened sensitivity to stories about their own industry while intruding into the lives of private citizens with breathtaking insouciance.

“We continue to support Adam Boland as we do all our authors and the right to tell their fascinating stories.”

The publisher has courted to controversy and is marketing the release as the book Channel 7 tried to stop.

Meanwhile, Seven had been silent on the matter throughout the saga but this morning maintained that it decided to let the book go ahead anyway.

“Seven was successful in obtaining court orders to prevent further sales until we read the book to check there no breach of confidentiality and now that we have read it we have found there is nothing in it so have decided not to continue with further legal proceedings," the statement read.

Adam Boland has agreed with Seven to discontinue the proceedings with no order as to costs.

Which raises the question: was MUP really being that rebellious by rushing the book into stores, or did it simply get the all-clear from Seven's lawyers? Either way, Seven's legal action helped fuel a marketing drive.