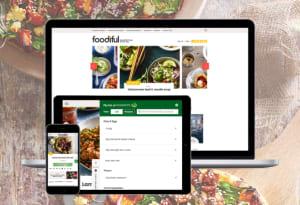 The site has secured Woolworths as its exclusive retail partner, similar to the relationship between Taste and Coles. The the deal will see consumers be able to buy directly out of Seven’s TV shows, including Better Homes and Gardens and Zumbo's Just Desserts.

In what Seven West Media is saying will 'revolutionise the food and grocery shopping experience in Australia", Foodiful enables consumers to plan and purchase meals on the site, with a variety of menus available.

The move also sees the food content from Seven West Media’s portfolio of brands brought together in one destination.

Pacific Magazines CEO Peter Zavecz says: “Foodiful is our most significant new brand launch in the last ten years. This is a major play for us in the strategically and commercially important food category and another example of our ability to innovate and lead wherever we choose to compete.”

Foodiful’s launch will coincide with Seven West Media’s coverage of the Rio Olympic Games. The partnership will also be promoted in Woolworths’ stores.

The technology includes the ecommerce offering, shoppable ad units and shopper tools, such as filters to help with dietary requirements.

Foodiful will be promoted with 10 and 15-second TV spots, print advertisements, social and digital support across Seven West Media and a target, audience conversion, SEM and acquisition strategy.

Food titles have gone to strength-to-strength in a climate that hasn’t been kind to other categories. Remember Cleo?

Taste has stood somewhat unchallenged as the leader of the food magazine cult, taking over Woman’s Day as the most read publication and raking in the commercial benefits, so it’s no surprise Pacific Magazines is making a play for a slice of the pie.

A big part of Taste’s success has come from its partnership with Coles (and a heavy investment in search marketing) so it is interesting to see Pacific Magazines and Woolworths team up to mirror this model.

Could the partnership turn around Woolworth’s woes? It's too early to tell, but Taste just got its first real competitor.