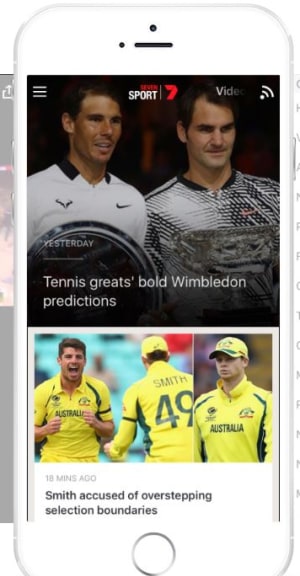 Broadcast TV network Seven has inked a “significant” deal with Optus which sees the telco's customers given data free access to some of Sevens premium sports events.

The partnership gives eligible Optus postpaid mobile customers four months of video on demand streaming, 'data free', and launches with Seven’s coverage of the Australian Open Tennis, the Olympic Winter Games and the Commonwealth Games on the Gold Coast. The period spans January to April 2018 on Seven's 7Tennis, Olympicson7 and 7CommGames apps.

“This is a significant partnership for the network coming at a time when we launch into an unprecedented wave of live sport, right across the Screens of Seven,” Dickens says.

“Australian audiences will experience a breadth and depth of coverage that they’ve never had access to before. Working with Optus to give consumers access to stream this remarkable calendar of sporting events data free, is a huge win for sports fans right across the country.”

Seven, the network of the Australian Football League and the Olympic Games, says it will continue to “dramatically expand” its coverage of major sports across its digital broadcast television channels and accelerate coverage across online, mobile and other emerging forms of content delivery.

Seven has long relied on a strong sports line up, and presented a strong slate of sports at its upfronts this year including the Winter Olympics, the Commonwealth Games, Tennis Open, AFL and NRL.

Just last month, speaking to shareholders at its AGM, Seven revealed it would strip out $25 million per year in job cuts, and find savings of $50 million in 2019 to offset losses in "major one off events", the bulk of which is likely to come from paying over the odds for rights to the Summer and Winter Olympic Games.

Seven’s chief revenue officer and event director of the Olympic Games and Commonwealth Games, Kurt Burnette, says: Seven is the home of the biggest events in sports over the coming months and we are committed to bringing these events to all Australians across every screen and every device.

We are pleased to be working closely with Optus across our broadcast and digital coverage for the Australian Open, the Olympic Winter Games and the Commonwealth Games.”