While you won't be able to catch the US ads live in Australia, closer to home Channel Seven is live streaming the Patriots and Falcons game that takes place at the NRG Stadium in Houston Texas - including half time entertainment from Lady Gaga.

This year Seven says it has been able to grow revenue for its coverage of the event, which runs from 10am to 4pm on 7Mate.

"It's been the match-up that all Super Bowl fans have wanted," Seven chief revenue officer Kurt Burnette tells AdNews.

"Advertiser interest is at an all time high, as much it was for the 'Jarryd Hayne' factor with revenue up year on year.

"The Seven Sales teams sell across 7, 7 Live Streaming and ESPN to ensure advertisers can reach every consumer of the Superbowl across screens no matter where they are."

Major sponsors to support the coverage include 20th Century Fox, Isuzu and Airtasker - despite the latter facing legal action over the use of the "Like a Boss" slogan in its recent marketing campaign.

Burnette says the fact that more Australians are showing increasing interest in NFL and the Super Bowl and its entertainment each year, shows the the code can only go from strength to strength.

MD M&C Saatchi Sports & Entertainment, Jamie Gilbert Smith, says while the Super Bowl half time ad break has become one of the most highly anticipated entertainment performances across the globe, it’s about more than the reach.

“In a world of on-demand content and consumers actively avoiding advertising, live sport is one of the few appointment-viewing occasions left to marketers,” Gilbert Smith says.

“What makes the Super Bowl ad breaks unique is the uncontested infatuation from audiences. The half-time break has become an institution for showcasing the most anticipated ads in the world.

"Of the 100 million plus audience, a large percentage will be actively watching the ad break, liking and sharing the more successful ads across their social channels. If executed well, these ads transcend the NFL/sports arena to reach broader audiences through their creativity and appeal.”

Meltwater, a social media monitoring business which creates sentiment indexes based on online discussions, took a look (see below) into the brands that were trending ahead of #SB51 between 23 January to 3 February. It found there were three commercials in particular that created a lot of buzz within the wider conversations taking place around Super Bowl on social media, those being Doritos, Avocados from Mexico and Bud Light. 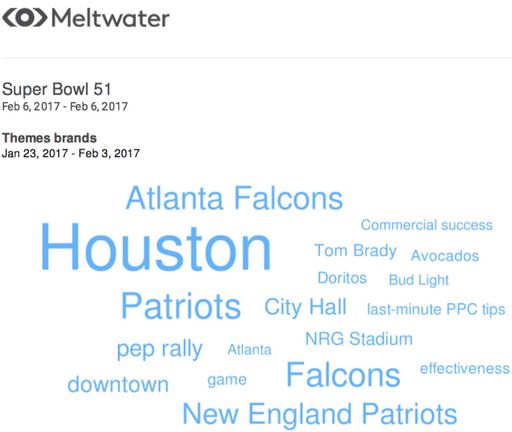 AdNews has rounded up some of the big brand TV ads from the Super Bowl 51, arguably the world's largest stage for advertising. From Humpty Dumpty to golden undercarriages and more celebrities appearances than the Oscars, here are some of the ads from year's Super Bowl. Vote Now.