By Arvind Hickman | 7 February 2017
Housemates Tim and Kyle are now favourites to win this year's My Kitchen Rules.

A strong metro audience of 1.34 million tuned in to watch Tim and Kyle smash the scoring record on My Kitchen Rules last night.

It led Seven and Nine's news bulletins and another solid performance by Married at First Sight (893,000), with Perth twins Michelle and Sharon Marsh getting hitched to Jesse and Nick, who randomly happened to know each other.

While Sharon was smitten with country beau Nick, Michelle took some time to warm to South Australian fruit seller Jesse, even though he supports Liverpool FC. The show ended with producers tracking down runaway bride Lauren.

For MKR, it's a welcome boost in eyeballs to a decline in ratings during the first week. Last night's episode was only 9% below the last year's season average (1.47 million). This is better than the season average, which is 21% below.

Viewers who tuned in would have seen history made on the show with a three-course BBQ feast that could easily be plated up at a posh restaurant.

An entree of Tuna ceviche with wild rice, avocado puree and wasabi mayonnaise was followed up by an immaculately presented spiced kangaroo with beetroot and and walnut puree.

This main course is welcome return to good cooking on MKR.

“This, and I’m not lying when I say this, is the best sauce we’ve ever had on My Kitchen Rules. This is the dog’s bollocks of sauces,” Feildel gushed.

The score is a welcome return to cooking after Bek and Ash scored the lowest total in the show's history.

After a week of ratings, MKR and Married At First Sight are settling into positions as the top two shows of the season opener, respectively. Attention will soon turn to a raft of new shows the networks are beginning to roll out around the 7.30pm slot. 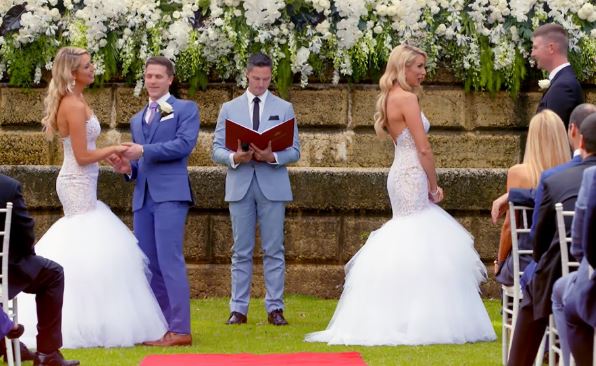 Michelle (left) and Sharon tie the knot with Jesse and Nick in last night's Married at First Sight.