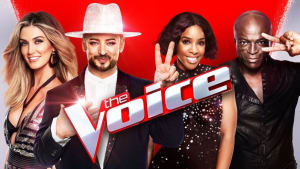 The show premieres on Monday 24 April at 7.30pm, going head-to-head with Ten’s popular MasterChef program in the primetime slot when it launches the following week.

Nine is banking on the introduction of new judges and a new format of live shows this season to make the program a ratings winner, aiming to follow the success of Married at First Sight.

For the sixth season of The Voice, Delta Goodrem and Seal return alongside new faces Boy George and Kelly Rowland.

As part of the sponsorship packages, the brands are leveraging Nine's assets across digital, social and a bespoke app for the show.

Arnott’s Shapes will launch a campaign during the show that introduces a new product. The brand will be integrated into The Voice, also creating a digital content wrap-up series of the blind auditions each week.

It is KFC’s fourth year as a sponsor of the show and Mazda has aligned with The Voice to celebrate the 40th anniversary of the Mazda 3 in Australia.

The sponsored app will also allow instant voting during the live shows, which Nine says makes viewers into the fifth coach.

Nine director of innovation, partnerships and client experience Lizzie Young says the combination of content, digital, social and The Voice app offers a range of assets that push boundaries for the network’s brand partners.

“The Voice continues to provide a powerful platform for brands to engage with Australian audiences at scale," Young says.

“Each year we see deep engagement with the audience through our cross-platform approach and that translates to results for our brand partners. For 2017 we are pleased to be working with a diverse range of Australia’s biggest brands.”