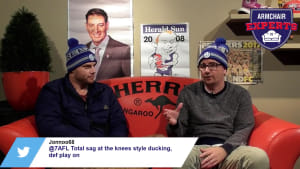 Seven and Twitter will continue their content partnership for the 2019 season of the AFL, revealing the return of 7AFL's "social show", Armchair Experts.

As part of the return of the show's second season, online betting platform PointsBet has signed on as the first major commercial partner.

Commercial partners have the opportunity to integrate within the show, including creating bespoke segments, product placement, or filming off-site at a client activation site.

Pre-rolls can be inserted before the live show plays on Twitter, and the integrated segment can be extracted and extended beyond the live show using Twitter Amplify, which allows for a pre-roll insertion before video content plays on the platform.

Debuting at the start of the 2018 season, Armchair Experts went live on 7AFL Twitter on Friday nights, with a pre-show looking at the game ahead and the week that was, a half-time show, and a post-match review show.

Following the success of the show last year, drawing in more than 1.5 million views across the season, Seven will now make every episode available to watch on demand on 7plus and though the 7Sport app.

“We’re committed to ongoing innovation in the way we connect brands to audiences through Australia’s largest sport. The 2019 AFL Premiership Season is shaping up to be bigger than ever and we’re thrilled to bring it to audiences in new ways across platforms.”

Armchair Experts returns to 7AFL Twitter throughout the 2019 AFL Premiership Season, with the first game of the season kicking off March 21.

Last week it was revealed long-standing AFL partner Toyota would continue its sponsorship of the league, inking a new deal worth $74m.

The league also took on a "first of its kind" deal with REA, while shaking up its media duties, appointing PHD as its media agency of record for the $15 millionaccount.