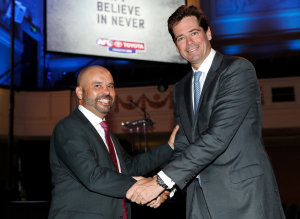 The AFL has signed a record four-year sponsorship deal with Toyota at $18.5 million a year .

The $74 million deal is reported to be the largest sports sponsorship deal in Australian corporate history.

Toyota will become the league’s official community partner, which will include the Toyota Good for Footy program, as well as becoming an official automotive partner of the women’s AFLW competition.

“Through this partnership, we are committed to growing this great game on both a national and grassroots level to help footy players regardless of whether it’s in front of thousands of fans or parents cheering from the sidelines," he says.

Gabriel says a vital part of Toyota's ongoing sponsorship of the AFL is the Good for Footy program, which focuses on the community clubs that are the breeding ground of future champions.

“As the official Good for Footy Community Partner, we’re aiming to raise a further $1 million in 2019 to help more than 1000 local, grassroots Australian football clubs with better facilities and equipment," he says.

AFL commerical general manager Kylie Rogers says Toyota has made a significant contribution to community football through the Good for Footy program.

"We are delighted to have them as our official auto partner for AFLW and we can’t wait to see what we create together at Marvel Stadium," Rogers says.