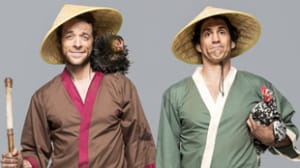 Southern Cross Austereo is believed to have made TV and radio superstars Hamish and Andy a lucrative offer to take up the reigns of its 2DayFM breakfast slot in a bid to revive its waning ratings.

AdNews understands that SCA is looking to bolster its offering in the competitive morning market, by giving the duo a deal worth $5m each over three years.

Hamish and Andy currently occupy a one-hour slot from 3-4pm called 'Happy Hour' on the 2Day network, but haven't been on the air full-time since the end of 2010.

The speculation follows declines across most segments across the 2Day network in Sydney in the GfK ratings.

The network has been particularly hard hit following the departure of number one breakfast show hosts Kyle Sandilands and Jackie O for rival station Kiis.

Currently the coveted breakfast spot is occupied by Jules Lund, Sophie Monk and Merrick Watts who pulled a 3.6% share of audience aged over 10, in the last radio survey - the lowest rating of the commerical stations.

Speaking to AdNews in September regarding what was next for the 2Day network, SCA chief content officer Guy Dobson would not be drawn on further detail but said the company was happy with the way the Sydney show sounded, if not the ratings. That made the plan for next year “simple”, he suggested, “to get those stations pumping”.

SCA would neither confirm nor deny the offer was in play.