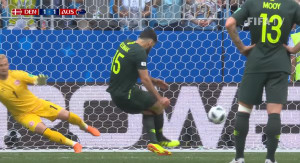 The SBS live coverage of the Socceroos' second appearance at the 2018 FIFA World Cup Russia dominated the ratings overnight.

The game between Australia and Denmark drew in a metro audience of 1.66 million viewers, as SBS won the main channel share with 23.4% compared to Seven, which came second with 16%.

Despite the main channel win, SBS failed to beat Seven in the overall network share, with Seven securing 26.7% and SBS managing 25.2%.

The ratings for SBS were almost identical to the numbers it drew for the Socceroos premiere appearance last Saturday.

SBS's post and pre-match coverage from last night also performed well in the ratings, drawing audiences of 720,000 and 616,000, respectively.

The 1-1 draw between the nations saw the Socceroos keep their World Cup dreams alive, as Australian captain Mile Jedinak scored a penalty late in the first half to level the game, after Denmark's Christian Eriksen opened the scoring early, with a goal in the sixth minute.

SBS has seen strong ratings growth this week, following the news it will continue simulcasting the 2018 FIFA World Cup until the end of Group Stage on Friday 29 June, with Optus Sport customers who purchased the telco's $14.95 package receiving full refunds.

Speaking to the media this week, Optus CEO Allen Lew said the company will now offer free access to Optus Sport to all Australians until August 31, whether they are current customers or not.

He acknowledged that demand for the service was "no excuse" for the issues and that the brand is "extremely disappointed" with the outcome.

"We are entering a new era of mobile internet and live sport streaming is an emerging technology and I think our partners also understand that and know the risk they take."