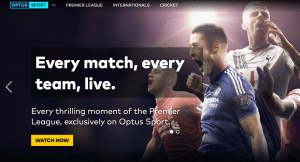 SBS will continue simulcasting the 2018 FIFA World Cup until the end of Group Stage on Friday 29 June, with Optus Sport customers who purchased the telco's $14.95 package receiving full refunds.

Speaking to the media on Wednesday night, Optus CEO Allen Lew said the company will now offer free access to Optus Sport to all Australians until August 31, whether they are current customers or not.

"We've listened to the public and decided to give Australia a choice, we don't want to continue to force them to use our product, we want them to have an alternative," he said

"That for me is the most important thing that we can do to make sure that re-instate confidence in the brand."

We are entering a new era of mobile internet and live sport streaming is an emerging technology and I think our partners also understand that and know the risk they take."

On whether or not the Optus brand would be significantly impacted by the issue, Lew said he and the company hoped Australians would understand that it has listened to them and is making a concerted effort to repair its image.

"Yes we've stumbled but we have learnt a very important lesson from it and we will be the better for it."

Lew said that this challenging period would create a "flow-on effect" to how the teclo delivers content such as the English Premier League and the next big event the company streams.

The free Optus Sport deal will give users the opportunity to watch the first two games of the upcoming EPL season for free as well.

Earlier this week, Lew acknowledged that demand for the service was "no excuse" for the issues and that the brand is "extremely disappointed" with the outcome.