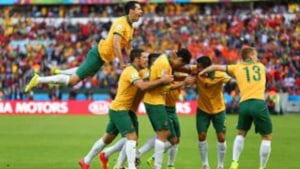 The SBS live coverage of the Socceroos' premiere appearance at the 2018 FIFA World Cup Russia dominated the ratings on Saturday night.

Across the five city metro, 1.65 million viewers watched as Australia lost to France 2-1, with total audience for the live broadcast reaching 2.1m.

Optus was in damage control all weekend as customers complained about the quality of the telco's coverage, with reports of outages and delays coming in from Friday evening through to Sunday morning.

Diehard football fans were left disappointed, as many Optus-exclusive games were also unable to be viewed.

Optus CEO Allen Lew, who was on deck at the telco's production studio in Sydney until the earlier hours of Sunday morning, tweeted an apology yesterday stating, "Australians can be assured that this has my personal attention, and the entire network's team's attention, and we will solve it".

"I apologise unreservedly to all Australians.

"We should have done better, we can do better and we will do better."@Optus CEO Allen Lew to @OptusSport customers who experienced streaming issues during the opening nights of the #WorldCup #OptusSport

Prime Minister Malcolm Turnbull also tweeted this afternoon that he had spoken with Lew, assuring Optus customers that the issue would be fixed by Monday night.

I have spoken with the Optus CEO, Allen Lew. He assures me he is giving the World Cup streaming problems his personal attention and he believes it will be fixed this evening.

An Optus spokesperson told AdNews it was able to improve the viewing experience for customers for the remaining two games overnight.

"We apologise to those customers affected and reassure them our team is working around the clock to ensure that we are delivering an excellent broadcast service to all Optus Sport viewers regardless of the platform they are using to enjoy the tournament," they said.

"Given the individual nature of some customer issues, we are working with customers directly to address their concerns and ensure that we deliver an excellent experience."

The youngest player at the World Cup, Socceroo Daniel Arzani, age 19, made his World Cup debut as a late Paul Pogba goal and a VAR-assisted penalty from Antoine Griezmann helped lead the French to victory.

Telstra-owned Ooyala has recently come out with a report, slating this year’s World Cup as the "last hurrah for traditional broadcasters" against mounting pressures from Over-the-top (OTT) streaming services.

Despite online streaming via mobile phones and tablets having soared in popularity amongst millennial audiences, the World Cup still strongly relies upon TV viewers.

"Near-instant startup, consistent video stream quality and uninterrupted delivery – without any buffering – will be critical to end-user experience and to keeping audiences engaged when it comes to events like the World Cup," Ooyala principal industry analyst Jim O’Neill says.

"The 'Millennial Flu' means that most people already struggle to watch content for hours at a time so, while the television remains a popular choice, they should expect their customers to watch alternative content online simultaneously if they fail on any of those 'quality of experience' factors.”

A spokesperson from SBS told AdNews that with an increasing number of platforms changing consumption patterns, it’s important that broadcasters enable audiences to engage with programming at their convenience, "which is reflective of SBS’s growing multiplatform sports coverage"

"The 2018 FIFA World Cup is SBS’s most connected sporting event ever across TV, radio and online, with audiences having the option to live stream matches via SBS On Demand, The World Game website, the SBS Radio app and official apps," the spokesperson said.