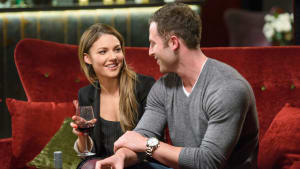 Ten's The Bachelorette will return in 2016.

Australia’s Bachelorette star Sam Frost is at the centre of a radio rumour, with media reports tipping her to be 41-year-old comic Rove McManus's co-host.

While Dan and Maz weren't quite ripe enough for 2DayFM's breakfast show, SCA's new strategy with McManus at the daybreak helm, is set to be the right dose of what the station's key 18-39 demographic want – however, until now, details of his co-host were unknown.

Weekday breakfast hosts Dan Debuf and Maz Compton were bumped to a weekend slot in 2016, after less than a year in the top role, as McManus was brought in to help salvage the ailing show.

The final episode of The Bachelorette has outranked this year's The Bachelor finale, with 1.52 million people tuning in to watch Frost pick Sasha Mielczarek.

While it is believed that a co-host for McManus will be announced Wednesday or Thursday this week, rumours are suggesting that Frost is the front runner for the spot.

“Rove is funny, relatable and we've got a superb plan in place to make sure the new show is everything you'd expect from one of Australia's greatest entertainers.”