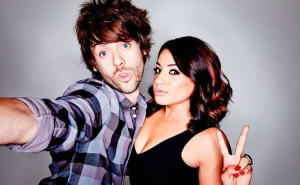 Weekday breakfast hosts Dan Debuf and Maz Compton have been bumped to a weekend slot as comedian Rove McManus is brought in to help salvage the ailing show.

Despite the duo's “fantastic” job, it wasn't good enough to boost listeners as the breakfast show pair have been on a downward trend - dropping 0.8 percentage points in the most recent radio ratings. This meant they only drew an audience share of 3.1%, which was more than 5% less than ARN's Jonesy and Amanda who took out the top spot on breakfast on 8.5% audience share.

However it's not back to seven day lie-ins for the pair, in 2016 Dan and Maz will be hosting a new national weekend breakfast show, from 6-8am on Saturday and Sunday.

SCA's executive director, metro operations, Guy Dobson, paid tribute to Dan and Maz for doing a top job, but stressed they will remain a very important part of the Hit Network line-up.

“Dan and Maz are a fantastic radio show,” Dobson said.

“We're committed to continuing to nurture and develop their infinite talents. They're definitely a show for the future and remain an incredibly important part of the SCA family.

SCA overhauled its breakfast show at almost the same point last year, with Merrick, Jules, Sophie and Mel B being axed in favour of Dan and Maz. At the time Dobson told AdNews that being relative newcomers will give Dan and Maz a point of difference.

“This show will be the only show on FM that resonates with under 30s, that talks in a language that under 30s understands. Being better isn't necessarily going to win you the race next year. Being different is the key criteria for us as well,” Dobson said.
The short-lived point of difference will see Logie-winning funny man McManus take the 6-9am slot.

“Sydney needs a big show, with a big name and it doesn't get much bigger than Rove.

“We've got a superb plan in place to make sure the new show is everything you'd expect from one of Australia's greatest entertainers. But, why would we tell you everything now. We're holding some of the show-and-tell for later. Watch this space, all will be revealed very soon.”

Just last week Southern Cross Austereo's Hit network head Dave Cameron told AdNews that the network was committed to the breakfast show, and while he noted that it wasn't bringing the results the network was hoping for, he did say it was a fairly new show compared to its competition.

Cameron said at the time that the network was going to give the show the time it needs to boost ratings, noting that it is still less than 12 months in the market against big heritage shows.

The news comes as Nova and ARN do some reshuffling of their own with Meshel Laurie defecting from Nova to co-host breakfast in Melbourne with ARN and to fill her shoes Nova have brought on Chrissie Swan.