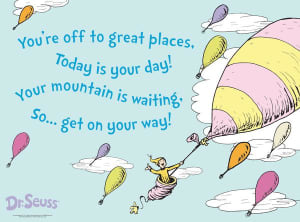 Qantas is drawing inspiration from American children's author and illustrator Dr. Seuss. The airline has launched a campaign based on the book 'Oh the places you'll go' to promote its credit card.

The campaign, by With Collective, asks frequent flyers to imagine “the sights you'll soar” telling them “your mountain is waiting, so get on your way”.

Qantas has reworked passages from the children's classic including: “There are points to be scored”, “you'll be seeing great sights” and “You'll join the high flyers”.

Qantas chief marketing officer Stephanie Tully says: “We wanted to support the launch of the Qantas Premier credit card with a campaign that showed just how far everyday spend on the card would take you and the 'Oh the places you'll go' was such a good fit as it clearly communicated the end rewards of using the card.”

The campaign goes live today and is running on TV across digital in airports and on Qantas' YouTube page.

“There is such a strong emotional connection with the Qantas brand and given credit card spend, by nature, is transactional, this campaign has given us a platform to connect those two things,” Tully says.

Qantas is asking Australia to name its Dreamliner fleet, which will begin flying from Perth to London in 2018. So far the top suggestions include Boomerang, Vegemite, Quokka and Flighty McFlightFace.