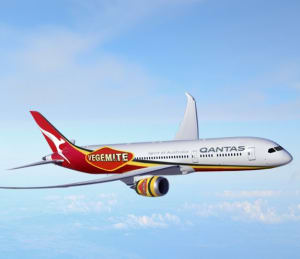 Vegemite has capitalised on Qantas' latest promotion by asking people to name one of the airline's new Dreamliners fleet after the spread itself.

Now, Vegemite has asked the public to support a Vegeplane, encouraging its Twitter followers to “Help spread the spirit”

Unfortunately, Twitter users were quick to point out that such a name would not be tolerated in Qantas' fine print, citing names have to be “free from any claims, trademark claims, by other parties”.

Good idea but we can't according to the T&Cs.

The entry must be:
free from any claims, inc. trademark claims, by other parties.

Adaptations of the spread were also suggested:

Previously, Qantas has named its fleet after Australian towns, Irish and Greek mythology and Australian aviation pioneers. Members can make eight suggestions on the Qantas website until 26 May.