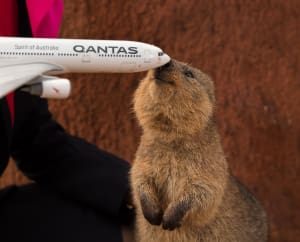 The Qantas name game has come to a close, with the eight Dreamliners each bestowed a different title referring to Aussie icons – but none of the novelty names put forward by consumers made it through.

The brief for the competition was: 'Things that capture the spirit of Australia'. The final names are; Great Barrier Reef, Boomerang, Skippy, Waltzing Matilda, Uluru, Great Southern Land, Quokka and Dreamtime.

The names will be painted beneath the cockpit window on each aircraft. The sequencing of names will be revealed as the aircraft are delivered, with the first to arrive in October this year.

“We had so many worthwhile entries, we could have probably renamed our entire fleet of 208 aircraft,” Joyce says.

“There were some clear favourites and it’s given us a good mix of names for our eight Dreamliners, from landmarks to native animals, literature and Indigenous heritage."

More than 60,000 suggestions were put forward and 45,000 votes cast in selecting the names, with popular suggestions including 'Lamington', 'Don Bradman', and fan favourite 'Flighty McFlightFace', none of which made it through.

Vegemite also got on board, hijacking the competition and asking the fleet to be called 'Vegemite', however the brand said it would have settled for 'Vegeplane'.

Sadly, the suggestion did not take flight, even considering Vegemite's photo shopping efforts:

“We know people get a real sense of home when they see the flying kangaroo at airports around the world, and hopefully they’ll enjoy seeing these uniquely Australian names as well,” Joyce adds.

Public reception of the names has so far been relatively positive:

We did it! 🎉 Thanks to your votes, this little guy will share his name with 1 of the new @Qantas Dreamliner aircraft. Pic: eatsnorexplore/IG pic.twitter.com/uAfynZMqrn

However some are a little less impressed:

This is not the first time a brand has asked the public to name a product, although, it hasn't always gone to plan. Consumers tend to jump on board with names that don’t always float brands' boat.

In 2015, a UK research vessel was (almost) named Boaty McBoatface, while McDonald's New Zealand was given the suggestion of Bernie Socialist Feast as well as Ronald's Creamy Surprise in a similar brand naming competition for a new menu range.