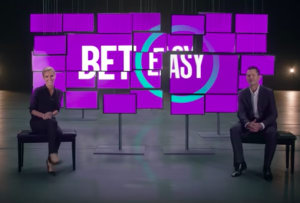 CrownBet has rebranded to BetEasy in the wake of its acquisition of William Hill’s Australian operations.

The rebrand, by Interbrand, is being promoted through a new ad campaign by The Monkeys that stars former Australian cricket great Ricky Ponting and actress Nicki Whelan.

CrownBet had previously wanted to rebrand with the name Sportingbet, but this was successfully challenged in the Federal Court by Irish gambling giant Paddy Power Betfair, which operates a similar brand called Sportsbet.

BetEasy reverts back to CrownBet’s original name, which was in place before the gambling company changed to CrownBet in 2015.

In the 30-second spot, Beteasy said it aims to set “a new tone and standard” in the Australian betting market.

In September 2017, The Monkeys released their first work for CrownBet.