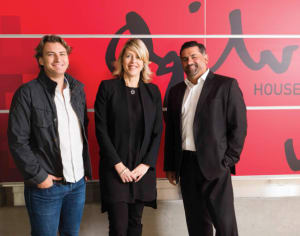 Ogilvy's globally stated philosophy is to 'make brands matter.' However in Australia its been working to turn that lens on itself and make its own brand matter more in this market.

Ogilvy Australia CEO David Fox has been at the helm of the network for two years, but ask him where he sees the agency at now and he'll be blunt; “We've gotten to the start line”. Since his arrival on Australian soil from working in the leadership team of Geometry in London, Fox has been on a mission to craft Ogilvy into the agency its clients are going to want tomorrow, in what he's called 'Australia's biggest re-start up”.

“By that, I don't mean throw everything out, because we didn't have much to throw out, but just reviewing where our client’s businesses were going,” Fox says. “We were outsourcing a lot of stuff: digital, data and social and if you're doing that you're outsourcing the future.

“We thought Ogilvy as a brand should do two things: it should bring as much of that skill-set in house and then have that capability fully integrated through having no P&Ls.”

It's a bold, agile mentality which would be hard for most agencies to meaningfully add to their business, but harder still for Ogilvy which is often subject to a cynical gaze in the Australian market. While globally Ogilvy is held in the highest esteem, criticism of the agency suggests it hasn't it those heights locally.

Fox says when he joined the agency, he spent three months in market talking to people, clients and ex-clients about its reputation noting that while the perception globally is that Ogilvy is an incredibly creative network, the reputation for Ogilvy in Australia is “a bit different”.

He says its a reputation left over from the 'Singleton, Ogilvy and Mathers' days which meant the agency was seen as being “in the business of advertising” rather than an “advertising business”.

While he is adamant that the eye-roll saved by some for the Ogilvy business holds little clout in reality, Fox does say that the Australian business has wanted to closer align itself with its global network for some time.

“People like to cut Ogilvy down,” Fox says. “We don't need to prove anything to them, but we need to prove to ourselves that we are a good agency. We'd like to become a lighthouse office for Asia, and then to the world.

“We're different to the rest of Ogilvy in the world. We don't want to radially change the place, but we do want to have a culture that is more closely aligned to the Ogilvy values.”

Already Ogilvy has started borrowing from the tools and processes that govern Ogilvy around the globe, and it has looked to bring in people that not only want to live the Ogilvy mantra but want to follow the new road the CEO has paved.

For Fox, the answer isn't to throw the baby out with the bathwater; he says the agency, and its solid portfolio of work, didn't need it. Instead, Fox is looking bigger – he wants to build a “fully-integrated collaborative machine” to take on advertising's next step.

That has meant a greater focus on what Fox calls “in-sourced collaboration” or better integration by dropping P&Ls between businesses arms, such as digital business BullsEye and building in project management to shake up its account management department.

It has also meant the the creation of new disciplines which are complementary to Ogilvy's core competencies such as innovation hub OgilvyVentures, which opened last year.

To bring both of those aims together is a head of media role, filled by former COO of The Media Store, Saurin Worthington in April.

The beauty of having a link to media owners

While some creative shops have been eyeing the creation of media arms to bridge the uncomfortable gap between media and creative in client portfolios, Worthington's role addresses the same need, but won't have Ogilvy buying spots and dots.

Instead, Worthington's role is two-fold; to build platform solutions into Ogilvy's creative work and to further collaboration between Ogilvy and external partners – other agencies on client's rosters and traditional media shops.

Ogilvy Sydney executive creative director Derek Green says the beauty of having a link to media owners means his team can know the platform possibilities out there.

“We have the big idea but it's in its infancy,” Green says. “If we can have experts come in they can shape it in a way we would never have thought of because we're just thinking about the big idea. My creatives are really good at writing great ideas, but they don't know the platform possibilities out there.”

Likewise, Worthington is looking to foster a closer working relationship between Ogilvy and other agency partners who may be on the same client roster, calling her role “the conduit between the big idea and the big execution”.

Among Ogilvy's clients are Lion and Coca-Cola. The agency cites their rosters as examples of where collaboration is a staple, and the outcomes show the benefits of this way of working.

“I've always been a big advocate for the client and I think as time has gone on they've become more paralysed – there is just so much stuff for them to think about,” Worthington says. “It makes sense then for agencies to be more end-to-end and that when there is a business challenge the client gets all the right people in the room”.

It's a role Fox says is “the last piece of the puzzle”.

“It's a really exciting time for us,” Fox says. “There are no more excuses any more; there's no where to hide. We have the model, we have the people and now we have to go out and make the thing work.”