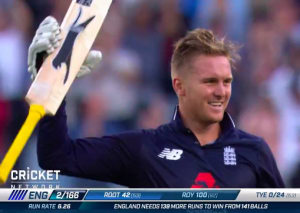 England’s crushing five wicket win over Australia yesterday was the most watched ODI in two years with a cumulative audience of 5.64 million viewers across both sessions.

The news and cricket combo won all key demos for Nine Network, which ended the day with a 39.2% share of the audience compared with Seven Network’s 27.7% and ABC’s 15.7%.

Cricket has helped Nine and Ten dominate ratings over the summer, but the Ashes series will still be loss-making for Nine.

In the past week, Ten’s coverage of the Big Bash League has helped its primary channel win key demos (25-54s, 16-39s and grocery buyer with a child) on weeknights.

Today, the Australian Open begins, which should see Seven hit back with strong ratings over the next two weeks.

Last year’s men’s final between Roger Federer and Rafael Nadal was the most watched event on Australian television.