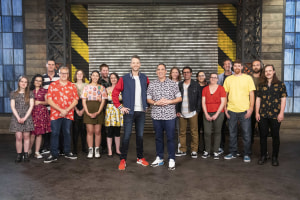 The show, hosted by Hamish Blake, returns this Sunday April 19th after a successful debut in 2019, with its final episode attracting a national audience of 2.1 million viewers.

“Lego Masters was a breakout smash hit for families across Australia and we are thrilled to have brand-new partners joining us, along with returning partners that have come back to play with us for another year,” says Liana Dubois, Nine’s director of Powered.

“As we saw in last year’s series, Lego transcends all age demographics from the young to the old and every age in between. We are more excited than ever to help our partners build solutions that will capitalise on the inter-generational power of the Lego brand.”

Joining as a new partner, Wonder will launch Lego Masters Viewers’ Choice, a competition to give viewers the chance to win a share of $100,000. Viewers will be able to vote for their favourite build after each episode through Lego Masters’ official website, and on the show’s Instagram Stories. The competition will also be promoted through TVCs and in supermarkets.

Kmart, which has returned for the second season, has also worked with Powered to create a commercial building on its long-term partnership with Lego. The retailer will launch the “Start your Lego Masters journey at Kmart” campaign, as well as digital content series “Kmart Mini Builder Challenge” to engage audiences on social media. Viewers are also encouraged to share their Lego creations each week using the hashtag #KmartLEGOMASTERSAus.

“We see our partnership with LEGO as an extension of that commitment – a way for us to celebrate the creativity and imagination of our children while keeping connected with our families and loved ones at home. We’re so excited to see the creativity of our Kmart community and give families across Australia and New Zealand access to kids toys, at a time they need them most.”

Also returning as a partner for the second season is Honda, once again enlisting Ryan “Brickman” McNaught to create a bespoke build for the car brand. The creation will tour Australia as an activation, alongside last year’s life-size car Lego build.

Honda will also sponsor a digital content series that will launch across the Lego Masters website and 9Now, including pre-roll, display media, branded broadcast playouts and branded social cutdowns.

Woolworths, Youi and a2 Milk will also advertise on the show through sponsorship billboards.