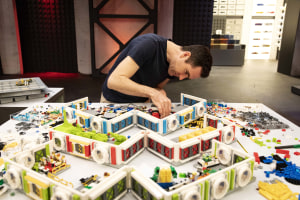 Online shopping platform eBay has reported an 89% spike in sales off the back of last week's launch of Nine's newest reality show Lego Masters.

The show, hosted by Hamish Blake, has been a ratings hit, with last night's episode once again cracking the one million overnight viewer mark.

eBay reported that the 89% spike in sales meant that two Lego sets were being sold every second following the show's debut. Purchases peaked at 8pm during last Sunday's episode.

In addition, Lego bricks were also in-demand with sales jumping 62%, as eBay adjusted its forecast on sales to reach $22.7 million in 2019.

The platform says the sales are not simply limited to the purchasing of new Lego sets, with eBay predicting that there is over $300 million worth of Lego in possible second-hand sales.