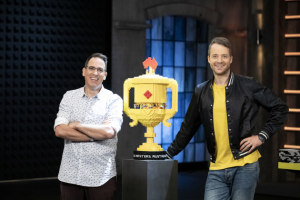 Nine's season finale of its newest reality series Lego Masters has drawn in over 1.49 million metro viewers overnight, as the season ends on a high note following a strong debut run.

Overnight, the finale was broken into two sections, 'finale' and 'winner announced' which drew in 1.24m and 1.49m, respectively.

The series, which is hosted by comedian Hamish Blake, took out the top primetime position overnight, as Ten's MasterChef and Seven's House Rules drew in 592,000 and 533,000, respectively.

Earlier this week Nine announced it will renew Lego Masters for a second season.

Brick-building dads Henry and Cade triumphed in a 28-hour grand finale free build to be crowned winners of the inaugural series.

Nine's fresh take on the competition reality format proved to be a winner for the network, reaching over one million metro viewers each night it aired.

The show's success comes off the back of an explosive start to the year for Nine in primetime, Lego Masters continuing on from the success of reality dating show Married at First Sight.

With Lego Masters over, Ten and Seven will have a few weeks to win audiences back to their respective primetime offerings, with Nine set to air The Voice in the coming weeks.

Seven will be hoping for House Rules to start to trend upwards in ratings, as it has done over recent years once the room reveals are underway.

Ten has also backed MasterChef to grow in audience figures once the competition moves into its later stages, with the show to feature more celebrity guest chefs and new cooking locations.

See: AdNews breaks down the performance of the major networks' Q1 programming

In the overnight main channel battle, Nine won the night with a 25.5% main channel share, with seven coming in second with 17.7% and Ten following with 11.9%.