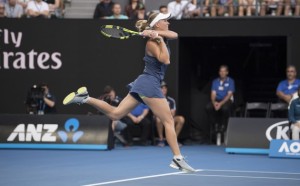 Nine has unveiled the major partners and sponsors for its inaugural Australian Open broadcast, with Kia, ANZ, AGL and Uber Eats topping the list.

The four brands, which have taken the top-tier partnership packages for the tournament coverage, which commences today, are also joined by Mastercard, Bunnings, Chemist Warehouse, Stan, Industry SuperFunds, Peters, Blackmores and APT as integrated sponsors.

Speaking to AdNews, Nine director of sales, sport Matt Granger said integration across Nine’s key properties and platforms, such as Wide World of Sport, Today and 9Honey, have been the key driver behind the success of its sponsorship and 'First Serve' packages.

He said the tournament has been over-subscribed with demand exceeding expectations by both retaining existing clients previous associated with tennis such as Kia and ANZ, and also signing new clients such as AGL and Uber Eats.

"The big difference here is we have worked with Tennis Australia more closely and our ability to bring what they are doing on the ground into the broadcast has been done in a more in-depth and integrated way," Granger said.

"Compared to previous years, we have gone deeper than ever before, working with clients to develop new and groundbreaking creative both in the broadcast, but also within the 'festival of the tournament'."

Following Nine's acquisition of the tennis rights, the network promised to work in tandem with Tennis Australia to expand the Australian Open into a broader community event and festival built around food, music and kids.

Granger said that while there were challenges with selling a whole new summer tournament that only lasts two weeks, as opposed to the summer of cricket, the sports sales team took a "clean slate approach", looking to build something new from the ground up.

"It was challenging to start with, but by taking a fresh look at the event, while also leaning on our experience with other major sporting events, it's allowed us to exceed our own expectations," Granger said.

"Even though it was a short run into selling the Open, considering we went out to market in August, we couldn't be more pleased with how has it turned out, selling our four partner spots, the eight sponsors and then selling our eight level First Serve packages."

Granger adds that demand for First Serve packages went well past the benchmark the network had set, leading the team to find further opportunities for advertisers.

Broadcast video on demand (BVOD) was also a strong selling point for Nine, with 9Now launching dynamic ad insertion into the live stream this week.

Granger likened the BVOD experience to the way viewers engage with the NRL on 9Now, stating that it will be a "complimentary asset" to the overall tournament.

Nine’s broadcast of the Australian Open will begin with the Today Show broadcasting live from Melbourne Park, as content over a range of platforms, including television, digital, live streaming and video on demand.

This will also be the first time the new Today Show line-up will go to air following the departure of Karl Stefanovic who is being replaced Deb Knight.

“Our cross-platform strategy, including Today going live from the tennis precinct, will provide a fantastic platform for brands, showing how Nine can use all its assets to deliver real results for marketers,” Nine chief sales officer Michael Stephenson said.

“It has been fantastic to work so closely with Tennis Australia. Our partnership and alignment is paying real dividends for existing and new partners alike. There is no greater aggregator of eyeballs on consecutive nights than tennis and there is no greater marketing platform for brands over summer than the Australian Open.”