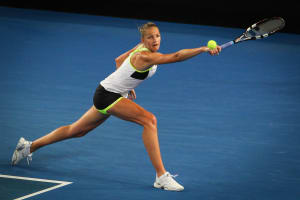 Seven and Tennis Australia have agreed to a new, $48.5 million deal with Nine, which will see Nine move its original deal forward by a year to broadcast the 2019 Australian Open.

Earlier this year Nine originally secured rights to the annual tennis tournament for broadcast, streaming, mobile, digital and social platforms for 2020 to 2024 in at a cost of $300 million, but the networks had been in negotiations over the rights for the remaining 2019 summer of tennis, with Seven wanting Nine to cough up $60 million for the season.

Despite Nine initially rejecting the deal, Seven has now caved, slashing $11.5m off the its original $60m asking price.

"As I said back in March, the timing of tennis and the audience demographics it delivers are a perfect fit for Nine and its advertisers," Nine CEO Hugh Marks says.

"We’re also mighty pleased to have been able to settle on a price for the additional year that is consistent with our original offer to Seven.”

The revised six-year deal includes the rights to the Australian Open in Melbourne as well as the lead-up tournaments around Australia – the Hopman Cup in Perth and the Brisbane, Sydney and Hobart Internationals.

Seven was originally stuck with the rights to both the cricket and tennis last week, after Nine originally walked away from the deal, stating the originally asking price was too high.

Both the cricket Big Bash Leauge (BBL) and Australian Open run concurrently, with the BBL's first game generally taking place a week before Christmas and ending in early February, and the Open running from 14 January until 27 January.

If Seven ended up stuck with the rights for both events, it ran the risk of having to evenly spread both the Open and BBL finals across its main, and multichannels, in the same week.

Seven West Media CEO Tim Warner said in a statement that the deal is "freeing it up" to concentrate on developing its cricket coverage.

"We are now turning our full-time attention to the 70 days and nights of cricket we have coming up, kicking off with the Australian women’s T20 test against New Zealand straight after the AFL Grand Final on September 29," he says.

"The combination of Big Bash and Test Cricket, live and free, on Australia’s number one network gives us a powerful and unprecedented marketing platform for our own content and our advertising partners.”

Tennis Australia CEO Craig Tiley thanked Seven for the 40-plus years of partnership but said it was time the sport to focus on "meeting changing viewer habits" and redevelop the Australian Open format, "capitalising on the digital wave".