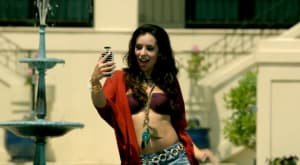 Despite an online backlash, Here Come The Habibs has had a strong debut with an average metro audience of 1.25 million viewers and a peak audience of 1.92 million.

This made it the second most-watched show after Zana bossed the kitchen on My Kitchen Rules, which had an average audience of 1.88 million. Seven's debut of Wanted also did well, attracting an average metro audience of 1.18 million.

Ten's I'm A Celebirty Get Me Out Of Here had an average audience of 765,000 metro viewers, no doubt lured by Shane Warne's pre-announced attack on Steve Waugh, describing his former captain as the most selfish cricketer he has played with.

For Nine, Here Come the Habibs was a ratings win after the show was heavily criticised on Twitter for promoting Middle Eastern racial stereotypes. It also provides Nine with relief after its reboot of Australia's Got Talent has struggled against the MKR juggernaut in the early days of the new ratings season.

Channel Nine's head of drama Andy Ryan tells AdNews he was "delighted" by the show's performance, which has exceeded expectations in the "toughest slot imaginable".

"It was high risk to have a narrative comedy on commercial television, there was a lot riding on this and we've been absolutely thrilled with the audience response," he says.

"The negativity was before people had even seen it. Once reviews started to come out they were overwhelmingly positive. The key to the success of the show is that it's topical and the characters are relatable and really warm, likeable people. The feedback we get is people just love the characters on both sides of the fence...they are not just tuning in for the gags."

Ryan believes strong word of mouth will help provide the show with stickiness for the weeks ahead.

"I think there's a thirst for stories that reflect the Australian experience. This show does deal with multicultural issues, it's called Here Come The Habibs not Here Come The Smiths," Ryan adds.

"It is venturing into this territory which is topical - multicultural Australia - and it deals with contemporary Australia. It pokes fun at the pretensions of people from all walks of life."

A consensus from TV critics, including the Sydney Morning Herald's Andrew Street, is the show is harmless fun and a throwback to Acropolis Now and Fat Pizza. 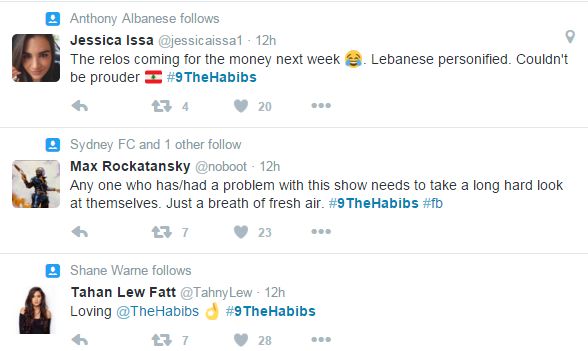