Nine and Ten must be Mad as Hell 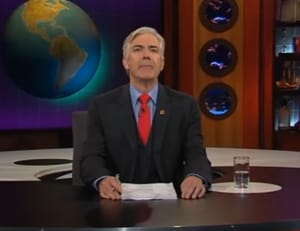 It's becoming a familiar tune, but MKR once again dominated the schedule, and the return of Shaun Micallef's Mad as Hell outrated both The Block and I'm a Celebrity.

My Kitchen Rules brought in more than 1.6 million metro viewers according to the latest overnight figures from OzTAM.

Winter was still the second-most watched non-news program of the night with 918,000 viewers, as Seven ran out with a 10-point win on the evening.

One of the major talking points was the performance of Mad as Hell against its commercial competitors.

It should be noted that the programs weren't competing directly, although there was some overlap with I'm a Celebrity running 11 minutes late, and the confirmed viewer figure sitting at 611,000.

Meanwhile, ABC put up a strong night with a 17.2% share, beating out Ten by one point.

Tonight's interest lies with the free-to-air premiere of the Australian version of Gogglebox on Ten.

It premiered on Foxtel last night, with the show the second-highest rating program for the night - a total of 146,000 subscribers tuned in.

You can check out the numbers for yourself below: