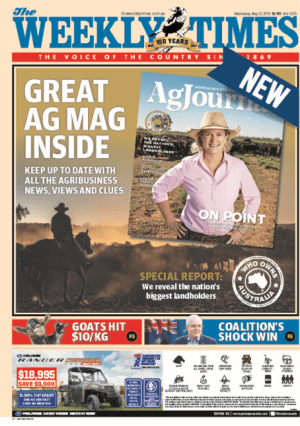 News Corp has bucked the trend of closing magazines by launching a new print quarterly, Agjournal.

The 40-page gloss magazine taps into the $60 billion agriculture food and fibre industry, and will be published by the nation’s largest rural newspaper brand The Weekly Times.

Published quarterly, it will have a reach of 700,000 and will be distributed with The Weekly Times, The Weekend Australian, Herald Sun, The Daily Telegraph, The Sunday Mail, The Advertiser, The Sunday Times and News Corp Rural newspapers in Queensland and Tasmania.

“The launch of AgJournal is a significant event for Australian agriculture,” The Weekly Times editor Ed Gannon says.

“For the first time there will be a national magazine telling the great stories that are happening on farms and in agribusinesses.

“It is also a significant venture for News Corp Australia, being inserted across the group's major mastheads, including The Weekly Times and The Weekend Australian."

The move by the publisher signals there’s still a strong market for print in Australia, despite magazines such as Bauer’s Cosmopolitan folding, particularly in regions beyond big cities.

AgJournal will cover agribusiness’ role in the Australian economy, innovations in the space, as well as the personal stories of people in the sector. Topics it already has planned includes the rise of alternative protein market, as consumers look for meat-free alternatives.

The magazine will also be promoted in digital, radio and newsagents across Victoria and the Riverina and will appear online on The Weekly Times website.

The first issue will be distributed in the 22 May The Weekly Times edition.