News Corp called out for failing to declare sponsored stories 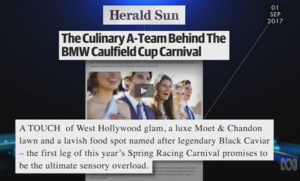 News Corp’s 'cash for content' articles were rumbled on last night's ABC show Media Watch, after the publisher's Herald Sun was called out for failing to disclose that certain stories were actually sponsored items.

Referring to two online stories as “overload indeed” and “some pretty good PR”, Barry revealed how the 'sponsored' strap line had failed to be appear when viewing the story via search engines or social media, leaving readers to soak up the content believing it to be impartial news items.

Article details mentioned how the Moet & Chandon Lawn sounds fabulous, with the “crisp Moet Champagne” and a “delicious gourmet grazing” menu – not forgetting the Black Caviar Restaurant, with its “electric atmosphere and awe-inspiring racecourse views”.

“Wow, you have to admit that’s some pretty good PR, but so it should be because while both these pieces, which ran on News Corp websites across the country are written by the Herald Sun, they’re actually giant ads,” Barry said.

Barry said if you clicked through from the Herald Sun’s homepage you might have spotted the 'sponsored' code, but many readers would come in via search engines or social media, meaning the stories themselves have no disclosure at all.

“This so-called content marketing, in which ads are dressed up to look like news, is increasingly common,” Barry said, mentioning how most editors agree that readers should be told when a story has been paid for.

Barry went on to mention other examples in The Daily Telegraph and was told by News Corp that “appropriate signposting of native and commercial content is important”.

Following Media Watch's enquiry both the Herald and the Telegraph added disclaimers to their stories.

A News Corp statement read: “The examples you have pointed out are largely due to the articles being placed on a web article template which has since been upgraded to better identify this kind of content.

"Regarding your other questions, you will understand that we do not discuss the commercial arrangements between News Corp and its customers."