Nielsen and the IAB have released the second set of numbers in their new Digital Ratings (Monthly) data set.

The monthly figures for March see News Corp's News.com.au widen the gap over its main rival, Fairfax's The Sydney Morning Herald, with the site reaching a total audience of 5.73 million.

The smh.com.au also grew its audience from the last month, with its total audience hitting 4.83 million, however its uplift couldn't keep up with News.com.au's 200,000 audience increase.

In other big moves, The Daily Mail Australia has experienced a nearly 400 thousand audience uplift, which has seen it jump up two spots rising to fourth position in the top ten, knocking down Ninemsn and The Guardian.

When it comes to news apps, the BBC News App increased by 144% in March according to Nielsen, and The Guardian is the leader in the current events and global news sub-category app rankings followed by BBC and 7NEWS.

According to Nielsen, the growth some sites experienced can be attributed to the start of the winter sporting season. The Formula One Championships, V8 Supercars, AFL and Cricket ICC World Twenty20 all drove up sport audiences across desktop, smartphone and tablet. Unique audience numbers for the sports sub-category saw an 8.3% uplift month on month, from 10.3 million to 11.1 million.

The big winners in the sports sub-category were Telstra Media AFL, ESPN Digital Network, FOX SPORTS, Telstra Media NRL and news.com.au – sport, all with unique audience increases in March, and most increasing by over a third according to Nielsen. 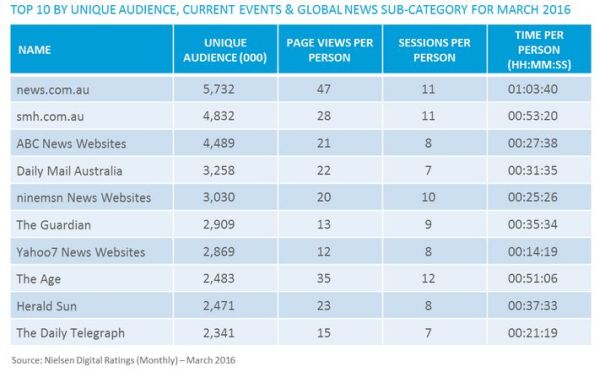