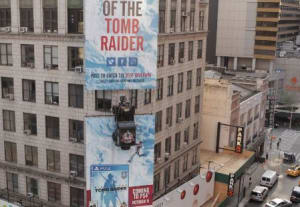 “Netflix will be bought”

New rumours are rife that Disney could buy SVOD service Netflix, according to TechCrunch. That said, Apple and Amazon are also making the rumour list – given all three have the means to make the buy. It says in order to be long-term profitable and survive, Netflix must continue to acquire huge numbers of new customers, retain the ones it has and do all that while keeping subscriptions at a low price. It says Disney’s market cap is about 3x Netflix’s, Apple’s is12x, and Amazon’s is 8x. Adding, “in any event, Netflix will be bought. It’s only a question of when.”

A 64-foot-tall 3D billboard, which includes a 2,000 pound Jeep Wrangler hanging from the side of a building, has been installed in New York. The experiential billboard activation, which also pumps out fake snow, is to promote the release of the Lara Croft game, "Rise of the Tomb Raider," on Play Station 4. It was created by Out of Home America Wilkins Media and Liquid Advertising and will be there for four weeks. According to AdWeek, the FDNY and other city officials examined the billboard for safety.

CHE Proximity has opened the doors to a marketing technology consultancy called The Brightsmiths to “demystify” martech. The new agency will service both CHE Proximity clients and have its own direct clients, was created to help clients better understand adtech and martech and the opportunities they present. The consultancy will be led by Mark Gretton.

You can read a profile interview with CHE Proximity CEO Chris Howatson in the October issue of AdNews.

Out of home company Adshel will add 110 new digital screens, expanding its digital network, Adshel Live, to 665.  Advertisers, including Google, Citibank, Foxtel and Jetstar have signed up for the roll out. Adshel focuses on small format panels, such as bus stops and train stations, and is riding the crest of an outdoor advertising boom that has seen the small format segment grow 17% to $55 million in Q3.

It's not just Skittles getting yanked into the latest Trump drams, as Tic Tac has become the latest brand to hit back at at a Trump via social media. The Washington Post published a video showing conversation about women between Trump and TV personality Billy Bush back in 2005. In referring to Days of our Lives actress Arianne Zucker, during the clip Trump says to Bush: "I better use some Tic Tacs just in case I start kissing her. You know I'm automatically attracted to beautiful - I just start kissing them. It's like a magnet. Just kiss. I don't even wait."
Tic Tac was quick to respond on Twitter, saying: "Tic Tac respects all women. We find the recent statements and behaviour completely inappropriate and unacceptable."