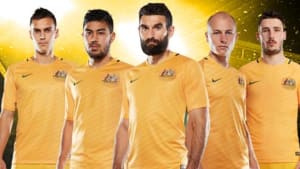 Nine to show Socceroos after striking deal with Fox Sports

Nine Network will broadcast the eight remaining Socceroos FIFA World Cup qualifying games after striking a deal with Fox Sports to simulcast. Previously, Fox Sports had exclusive rights to broadcast the games in Australia. FIFA World Cup qualifiers are not on the government's anti-siphoning list that ring-fences coverage for FTA television. Fox Sports beat SBS to secure broadcast rights from the Asian Football Confederation. The games will be called by Fox Sports commentators Simon Hill and Andrew Harper on both broadcasts. The first game on Nine will see the Socceroos (pictured) take on Saudi Arabia early Friday morning. The Australians are currently on top of their group table and wins in Jeddah and against Japan in Melbourne next week will go a long way towards securing qualification.

The Australian Psychological Society (APS) has appointed Cummins&Partners as its creative and media agency following a competitive pitch. The agency's chief strategy officer Adam Ferrier, is himself a psychologist with a degree in clinical psychology. He says the agency believes psychology is the foundation of building successful brands adding that it's an “honour' to work with the APS. “It is also a magnificent opportunity for us to forge strong relationships with psychologists in Australia. We’ve got some really interesting projects on the table which we are excited about bringing to market in 2017,” he says. The APS represents over 22,000 psychologists and its remit is to rise the profile of the discipline and profession of psychology, and psychologists in Australia.

Kerry McCabe has been promoted global president of RadiumOne. McCabe has been RadiumOne's managing director of Asia Pacific since November 2013 and there are no plans to replace him at this stage. The move follows the announcement that Adam Furness would take on the role of managing director ANZ – a new position for the Australian arm of the business. Prior to joining RadiumOne in 2013, McCabe held roles at Microsoft and Integral Dynamics. The promotion does not affect McCabe's role as chair of the media and advertising industry charity UnLtd, which he founded in 2007.