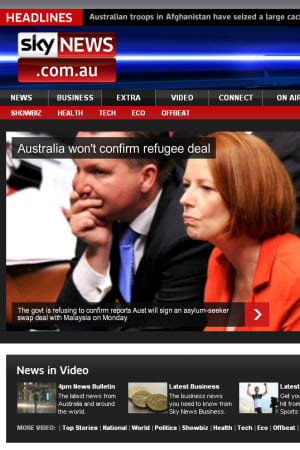 Ten Network and WIN Corporation have begun affiliate talks that could see WIN replace Southern Cross as Ten's regional partner, The Australian reports. If successful, it would end a 27-year relationship between the Nine Network and WIN. It is believe the Bruce Gordon-owned regional network would be able to demand a lower rate from Ten than what WIN and Gordon currently pay Nine, which is equivalent to 47% of WIN's revenue. Affiliate agreements tying Nine and WIN, as well as Ten and Southern Cross are due to expire at the end of June.

New Foxtel CEO Peter Tonagh has been appointed board member of Ten Network. Tonagh joins the Ten board as a representative of Foxtel, a position that was held by Richard Freudenstein, who Tonagh replaced. Tonagh was appointed Foxtel CEO on 17 March 2016.

Nine Entertainment Company has refused to sell its stake in Sky News to parent company News Corp. Nine owns a 33% stake in Sky News and was previously open to selling it under previous boss David Gyngell. Foxtel's contract to broadcast the Sky News runs until the end of 2017, with speculation News Corp could establish a rival news channel if it fails to acquire Sky News.

Controversial TV show Seven Year Switch has attracted another solid audience with a average metro audiecne of 826,000. This is up nearly 9% on last week and close to the debut audeince of 860,000. This made it the third most popular show outside of news and current affairs. My Kitchen Rules continued to dominate with an average metro audience of 1.37 million people, followed by Home and Away with 848,000. Reno Rumble had 370,000 metro viewers, down 48% on the same episode last year.

The highly anticipated Batman v Superman: Dawn of Justice smashed the global box office with a $420 million debut over the weekend. That’s the fourth biggest global opening of all time, just behind the likes of Star Wars: The Force Awakens and Jurassic World. In Australia, Zack Snyder’s superhero epic opened with an impressive $13.1 million and took home the second biggest debut of 2016.

Instagram has announced it’s extending the length of videos that can be uploaded to 60 seconds, up from 15 seconds, as the time people spent watching video on the platform has increased by more than 40 percent in six months. It’s already started to roll out this extension, which should be available to all users within the next few months.

Earlier in the year Instagram extended the video length for ads, kicking off with a T-Mobile promotional spot featuring rapper Drake.

Starting today, Twitter is making images accessible to everyone, including those who are visually impaired. Rolling out to iOS and Android, users will now have the option to add descriptions to images in Tweets. The update aims to ensure content shared on Twitter is accessible to the widest possible audience.